Yesterday was a great day for a stroll in one of the local parks. The forecast said: “50% chance of rain.” It definitely looked cloudy but I was too entertained by gators in the park to notice the clouds approaching. The gator in the photo below, in particular, was just hanging out and chillaxing while everyone just took photos.

Before I realized it, it was pouring! It was like someone had just opened the faucet. We managed to find shelter under the stairs of one of the observations towers. There was a group moms with five children who looks like they were six or seven years old. They were definitely not impressed with the situation. This was not what they had signed up for. I was also thinking: “well this sucks!” The stairs were not really providing much shelter.

Then, we all saw a kayak with two people (see image below) paddling as fast as they could trying to make their way back to the “launching point” were they had rented the kayak. In that moment I realized that:

A: While sometimes you may think you are in a bad situation, it could always be worst.
B: Sunny days are good but you have to make the most out of days with a “50% chance of rain.” 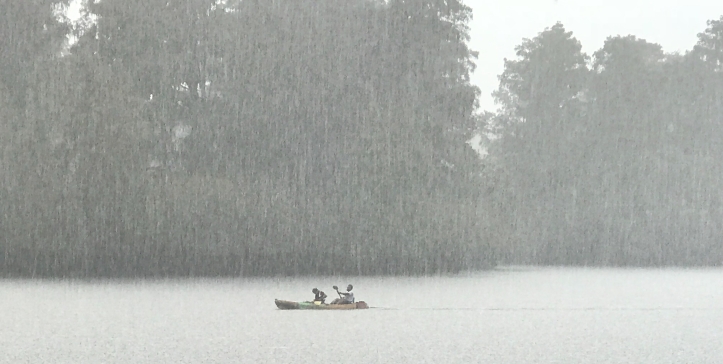